February and NASCAR at the Mill Pond Library

February in Florida means NASCAR Racing has started for another year. At the Kingston Mill Pond Library this month, thanks to part of a collection owned by Duwane Marwitz, you will find some NASCAR diecast cars and memorabilia on display.  Most of his collection is of the late Dale Earnhardt Sr.

"It all started when I was at a friend's house watching the 1996 Daytona 500 race on TV. One of his kids was playing with a Dale Earnhardt diecast car. I asked him where he had gotten it from and I was hooked." Duwane said. "The Wheaties car was one of my first two NASCAR diecast cars I bought; it just caught my eye when I went looking to purchase something from the Dale Earnhardt Sr. collection". Dale Earnhardt is the first stock car driver to be displayed on the Wheaties box twice, 1997 AND 2010. Duwane has both Wheaties boxes with Dale Earnhardt on them (full). The one that is on display is from 2010.

Some of his most prized cars are on display including the 1997 Daytona 500 Crash car and Wheaties car. "I have been watching NASCAR racing since the 1979 Daytona 500 was the first race to be broadcast in its entirety live on TV. My wife, Ann, made me a checkered Teddy Bear (on display) and some of the books and memorabilia are gift from my family over the years. Just before a 2001 Daytona 500 party, I purchased the OREO car that Dale drove in the 2001 Bud Shootout at Daytona, and I had it on display at the party. Over the years paint schemes on the cars have been popular with the fans, but nothing like the 50th Anniversary of NASCAR in 1998. I purchased all the diecast cars that made up the 1998 Daytona 500 starting line-up that were produced that year. (Written by D. Marwitz) 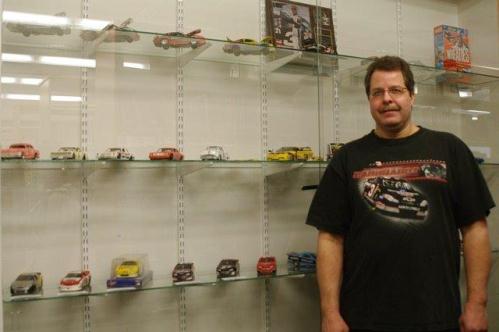