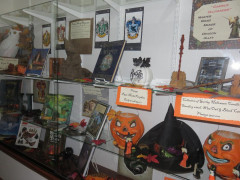 It won’t be long, and children will be planning their costumes for Halloween and trick or treating.  Inspiration may come from our new display “The World of Wizards” created by Janet Burdick with props from Bob Burdick and Rick Broz.

Are you a fan of Harry Potter? Gaze at the Sorting Hat which was a magical hat used at Hogwarts to determine which of the four houses (Gryffindor, Hufflepuff, Ravenclaw, and Slytherin) each new student belonged to.  The sorting hat originally belonged to Godric Gryffindor, one of the four founders of Hogwarts, and it normally stayed in the headmaster’s office until it was needed.  You can also see several wands, and of course Harry Potters owl, Hedwig.

If you are into vintage Halloween decorations, the display holds some of those as well.  There are paper mache pumpkins made in the early 1940’s.   And a set of Gurley Halloween candles from the 1950’s including a witch, a wise owl, and a black cat.  Revisit the world of imagination, and then select the best treat of all…your favorite books and movies which can transport you to a world of magic, be it Harry Potter or The Wizard of Oz or even Frozen, found on the shelves of the Mill Pond Library.  Unlock and open the doors of adventure and explore the world of imagination today!