"Pop" in and see the new display at the library! 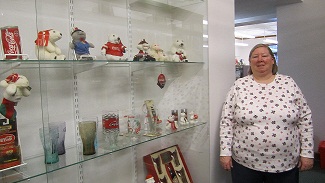 When you think of Coca-Cola your first thought is probably of the soft drink. If you stop at the library in Kingston and look at the new display, you just might change your mind. Ted & Michelle MacHugo, of Kingston, have been collecting Coca-Cola items for the past 15 years. Their collection includes not just bottles of the soft drink, but pens, glasses, cookie jars, cars, a stapler, ornaments, even a bobble head, to name a few.

When asked how they got started Michelle said, "I saw some Coca-Cola figurines for sale from the Bradford Exchange, thought they were cute, and bought them. After that friends and family started buying them as gifts for us, and from there the collection grew." Michelle went on to say that their display cases are full to the brim and their collecting has slowed down in the past couple of years.

Some of the items in the collection are newer, and some are older. There is a 75th Anniversary Commemorative Clear Bottle that most of those viewing the display will say "Hey, that's how we used to get cokes as a kid." So "pop" in and take a look the next time you are in Kingston.