Check out the new "I Spy" display at the Mill Pond Library in Kingston. Terry Kling, avid library user, came in and said she had some old cookbooks that she thought would make a nice display in our display case.  The library is always looking for new things to put in the case, so of course we said "Yes, bring them in."  When she came in the next day with several boxes of items, the display went from old cookbooks to "I spy with my little eye a key to the past."

According to Terry, the homemade cookbooks came from Lina Mielke, her husbands great-aunt. Lina loved to cook, and collected her favorite recipies from where ever, cereal boxes, magazines, friends, etc., and as you will see she then made her own cookbooks. Terry got the cookbooks when Lina passed away and they were going to be thrown out.  Terry said "Thrown out?" and into her arms they went.  Along with these wonderful books from Lina, Terry has recieved many other items as "gifts" throughout the years.  Dorothy Voelker gifted Terry the sewing tin and contents, Ida Granger (Terry's grandmother) had the table cloths, darts, iron and butternut can! The picnic basket came from a neighbor, Stella, who lived in an old farmhouse at the time. Many other items have been found or gifted to Terry throughout the years. "As it goes, most of the items someone has left behind for people to sort through after they are gone can be someone elses treasures. I believe they are somehow still attached to the items, if only in my memory!"

Come and share the memories of the past at the Mill Pond Public Library with the "I Spy" display, and bring the children too.  There is a sheet by the display for items the children can "spy".

Angelica Kling (left) and Phill Costa (right) check out the new "I Spy" display case at the Kingston Library.  Terry Kling (middle) set up the display and said "I spy with my little eye, a key to the past." 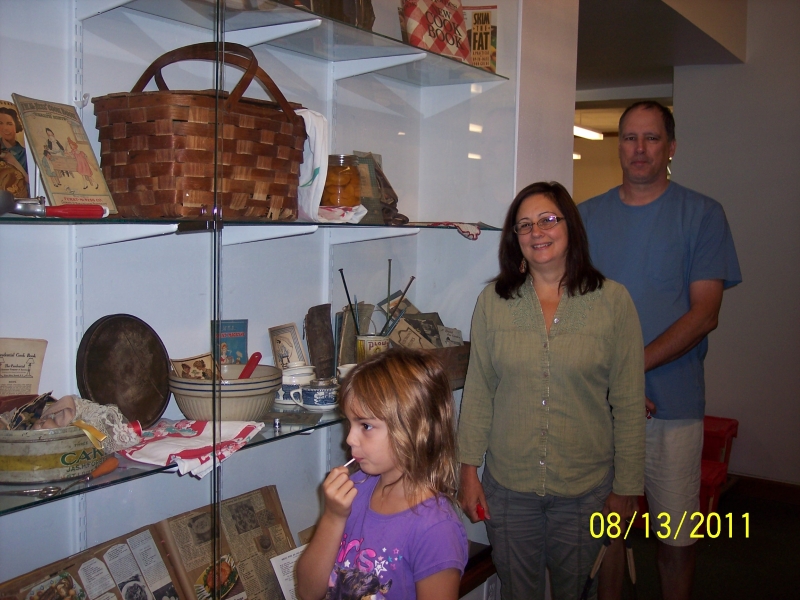